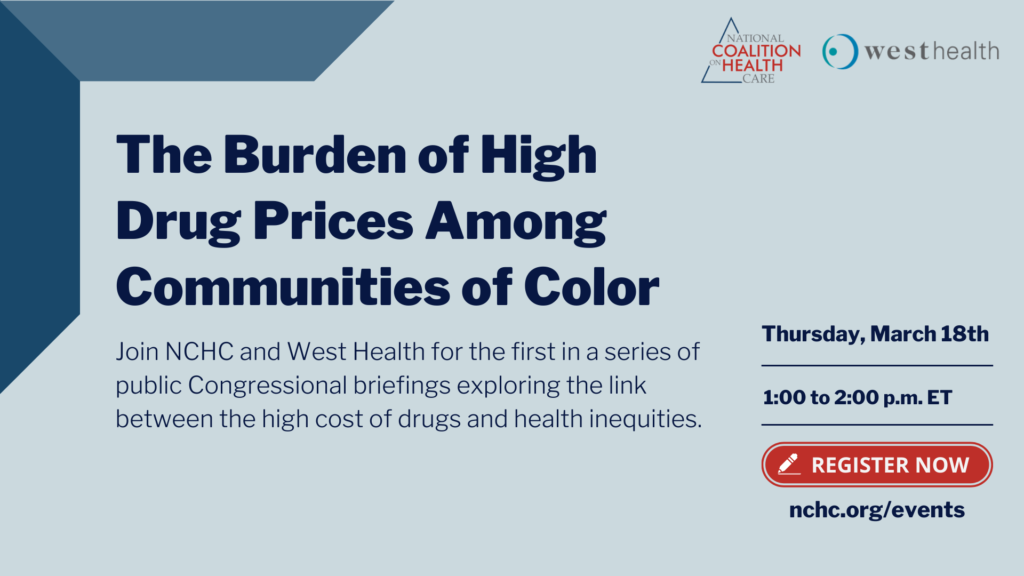 Congressional Briefing: The Burden of High Drug Prices Among Communities of Color

On March 18, from 1-2pm ET, The National Coalition on Health Care and West Health will co-host the first of a two-part, Hill briefing series: “The Burden of High Drug Prices on Communities of Color”

The first briefing will highlight how high drug prices, coverage gaps, and other systemic issues drive health inequities for communities of color. The briefing will feature several prominent speakers (biographies below) and updated data from West Health’s survey on drug accessibility and affordability. The briefing will focus on how COVID-19 has underscored the substantial impact that race and income have on health outcomes, exacerbated by inaccessible drugs and systemic barriers to coverage. The session will also discuss how previously proposed legislation would potentially impact communities of color and reduce health inequality.

The second briefing will focus on specific legislation later in the year (more details to come!).

Congressman Steven Horsford (D-NV)
Congressman Horsford serves Nevada’s 4th District in the U.S. House of Representatives, where he was elected in 2012 as Nevada’s first African American Congressman. Prior to 2012, he broke down barriers as the first African American Majority Leader in the Nevada State Senate. The Congressman was recently selected by the House Ways and Means Committee to lead the Racial Equity Initiative, which will address the role of racism in perpetuating health and economic inequalities.

John Rother, President, NCHC
John Rother is President of the National Coalition on Health Care, America’s oldest and most diverse group working to achieve comprehensive health system change. Prior to joining the Coalition in 2011, Mr. Rother served as the longtime Executive Vice President for Policy, Strategy, and International Affairs at AARP.

Amber Hewitt, Director of Health Equity
Hewitt, a social justice expert, is responsible for developing strategic priorities that help eliminate racial, ethnic and other disparities in health care. Prior to joining Families USA, she was Manager of Policy and Advocacy at Nemours Children’s Health System—where she focused on health equity issues related to payment and delivery reform among a broad range of other key children’s health issues.