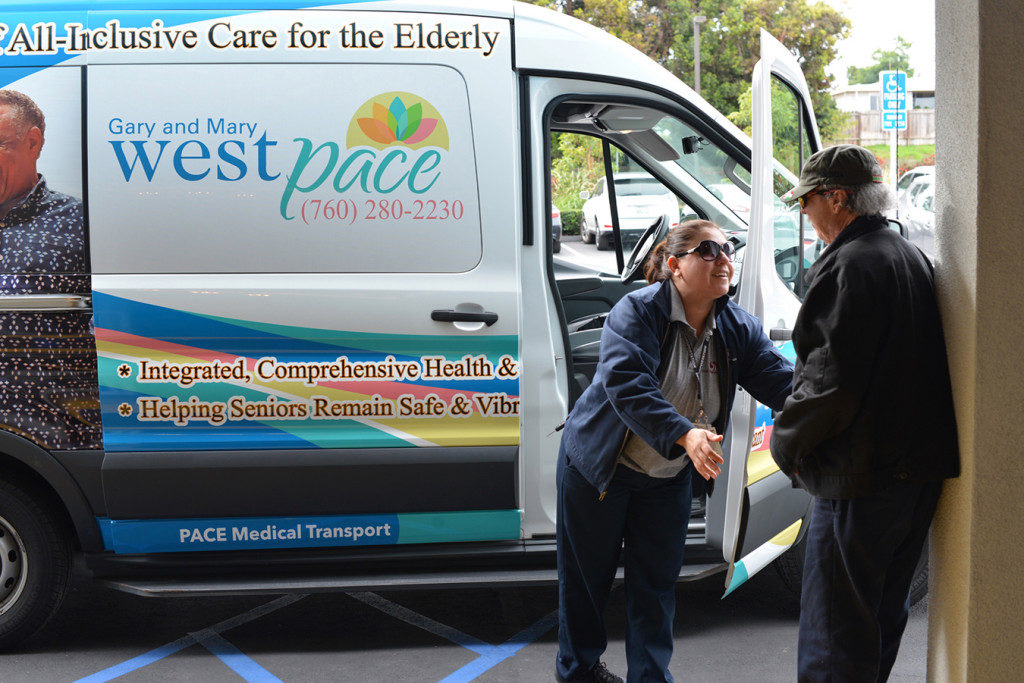 SAN MARCOS, Calif. — Two mornings a week, a van arrives at the Escondido, Calif., home of Mario Perez and takes him to a new senior center in this northern San Diego County town, where he eats a hot lunch, plays cards and gets physical therapy to help restore the balance he lost after breaking both legs in a fall.

If he wants, he can shower, get his hair cut or have his teeth cleaned. Those twice-weekly visits are the highlights of the week for Perez, a 65-year-old retired mechanic who has diabetes and is legally blind.

The nonprofit Gary and Mary West PACE center, which opened in September, is California’s newest addition to a system of care for frail and infirm seniors known as the Program of All-Inclusive Care for the Elderly.

The services provided by PACE, a national program primarily funded by Medicaid and Medicare, are intended to keep people 55 and older who need nursing home levels of care at home as long as possible and out of the hospital.

The program is more important than ever as baby boomers age, its proponents say.

“The rapidly growing senior population in California and across the country will put enormous strain on our current fragmented, and often inefficient, health care delivery system,” said Tim Lash, president of Gary and Mary West PACE. California officials consider PACE an integral part of the state’s strategy to upgrade care for aging residents.

The National PACE Association said data it collected for 2019 shows seniors enrolled in PACE cost states 13% less on average than the cost of caring for them through other Medicaid-funded services, including nursing homes.

Perez, like 90% of PACE enrollees nationwide, is a recipient of both Medicaid and Medicare. He’s part of a population that typically has low income and multiple chronic conditions.

PACE participants who do not receive government medical benefits can pay out of their own pockets. At Gary and Mary West, the tab ranges from $7,000 to $10,000 a month, depending on the level of care.

Nationally, 50,000 enrollees participate in PACE programs at over 260 centers in 31 states. In California, PACE serves nearly 9,000 vulnerable seniors at 47 locations.

About two-thirds of PACE participants have some degree of cognitive impairment. The Gary and Mary West center is no exception, which is why it has alarms on all the doors. If participants become agitated, they are led to the “tranquility room,” a softly lit space with an ocean soundtrack and a recliner. 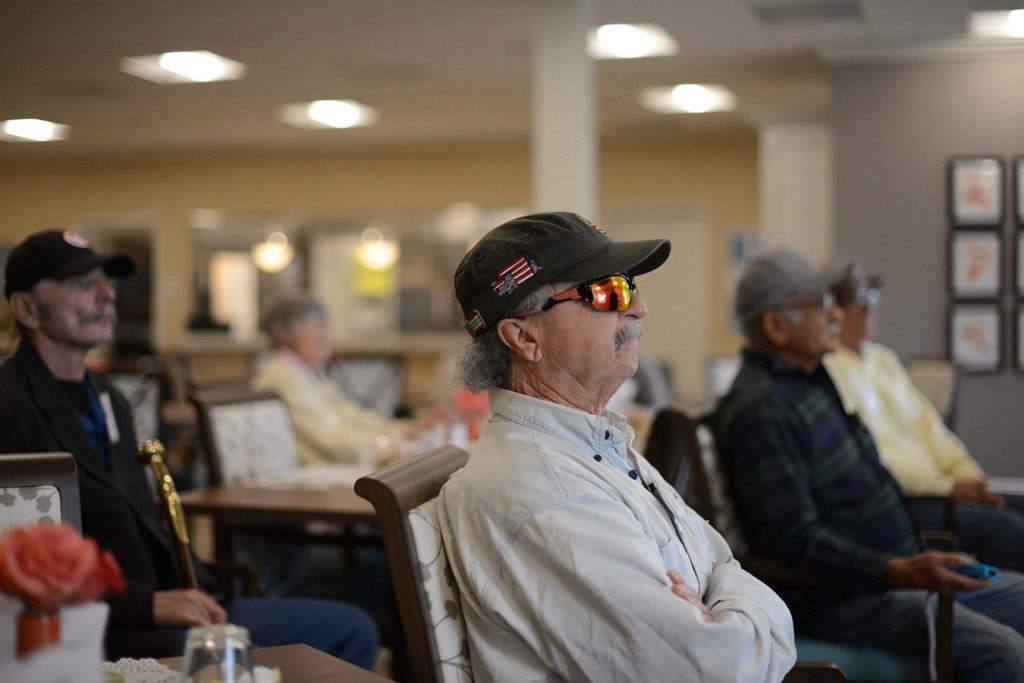 The center is California’s newest addition to a holistic system of care for frail and infirm seniors known as the Program of All-Inclusive Care for the Elderly.(Credit: Tim Ingersoll, West Health)

On weekdays, participants can arrive at the center as early as 8 a.m. and stay until 4:30 p.m. A PACE driver provides transportation to and from the center, as well as to appointments with outside specialists.

The center goes a step further than most other PACE programs: It offers dental care. Staff dentist Karen Becerra said some of her patients have cried for joy when they learned they were going to have their teeth fixed or replaced.

“These are folks who have terrible teeth,” Becerra said. “And if they have painful mouths, they have poor nutrition.”

Perez is missing teeth, but he was all smiles when he talked about his upcoming dental appointment. “They’re going to put new ones in,” he said.

The center opened with money donated by San Diego billionaires Gary and Mary West, telemarketing and telecommunications entrepreneurs. They’ve donated about $11 million to establish PACE centers around the country.

The center in San Marcos is spacious and cheery, with sofas and chairs scattered about and plenty of natural light. It’s meant to feel “like a friendly inviting living room,” said Dr. Ross Colt, a retired Army colonel who joined Gary and Mary West PACE a year ago as the primary care physician on staff.

Enrollees can repair to a patio to get fresh air or tend herbs in planter boxes. And they can participate in activities such as bingo, coloring and Trivial Pursuit, led by a recreational therapist.

Just down the hall from the main lounge are patient exam rooms decorated with photographic murals of sunsets and seascapes.

Center participants can get physical and occupational therapy in a rehabilitation gym, and the facility has a spa where they can shower or get their hair done. 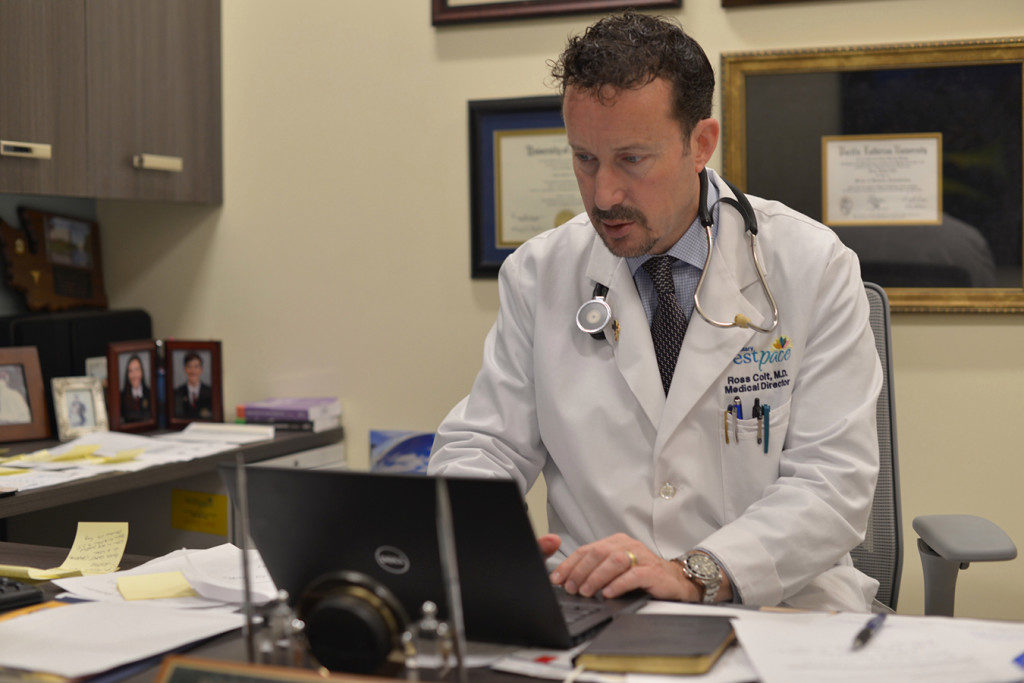 The executive director, Renata Smith, recalled a woman whose husband had been bathing her with a garden hose before she joined PACE. “We’re talking about basic human dignity here,” Smith said. “The spa makes participants feel good about themselves.”

Twice a week, an aide named Sylvia Muro picks up Perez at his home and takes him out to shop for groceries. Sometimes they stop at McDonald’s for pancakes and sausage.

Colt said participants come to him for checkups about once a month, but he can see anyone with a medical problem on a moment’s notice.

Unlike doctors in private practices, “I have the luxury of seeing them for an hour if I need to. And I can bring them back tomorrow if I need to,” he said.

Such access can save a diabetes patient from missing an insulin injection and avoid a costly hospital admission.

Smith, the center’s executive director, noted another important benefit: “the comfort of social interaction and something to wake up to every day.”