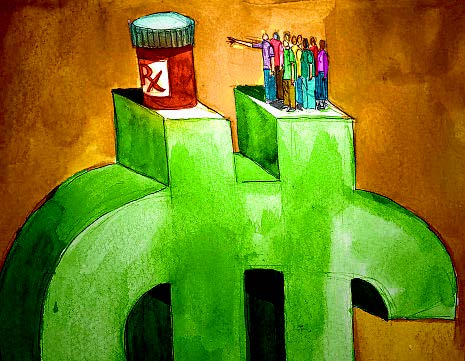 Last month, leadership from the seven largest pharmaceutical companies testified before the Senate Finance Committee about unaffordable prescription drug costs. The senators made high-minded speeches about holding Big Pharma accountable for its predatory pricing practices. These senators didn’t mention that 27 of 28 committee members received campaign contributions from those same companies.

That’s business as usual on Capitol Hill. In 2018, 98 senators and 415 representatives received donations from the pharmaceutical and healthcare industry. How can Americans expect a Congress almost entirely on the industry’s payroll to lead us out of our health-care cost crisis?

We can’t. The consistent driver of higher costs is the relentless pursuit of profit by a greedy health-care cartel marking up prices of products and services multiple times — and paying off Congress to protect its windfall profits. The U.S. health-care industry keeps prices artificially high and competition low, operating by the dictionary definition of a cartel: “An association of manufacturers or suppliers with the purpose of maintaining prices at a high level and restricting competition.”

In 2017, this cartel unleashed 1,400 lobbyists and spent $277 million to defend its interests. It’s currently in high gear undermining efforts to expand Medicare pricing to younger Americans. Last summer, an army of hospital and insurance trade associations and two powerhouse lobbies — PhRMA and the Biotechnology Innovation Organization — created the “Partnership for America’s Health Care Future” to campaign against any significant reforms to their profit-making status quo. After all, the $3.5 trillion the U.S. spent on health care in 2017 is their lunch money they don’t want anyone to touch.

As the Senate hearing illustrated, the health-care cartel keeps its pricing schemes hidden behind intentionally opaque and incomprehensible terminology to obscure multiple markups that inflate costs:

Pharmaceutical companies set whatever price they want for newly approved medications and obscure “list prices” behind “rebates” and “coupons.”

Meanwhile, the cartel floods our political system with a river of cash to protect vested interests.

As a businessman who understands supply and demand, I know monopolistic, predatory pricing when I see it. For too long, we in the business community have accepted high health-care costs as part of doing business, as if the health-care cartel were an organized crime group to pay off. This abets the cartel and distorted market forces it imposes.

Instead, private-sector leaders need to leverage their buying power to drive down prices. Business has more buying power than any other entity in the marketplace — including Medicare. In 2017, 156 million Americans — 57 percent of all Americans aged 0-64 — were covered by employer-sponsored health insurance.

Insurance costs have also risen drastically. Directly or indirectly, businesses pass along higher health insurance costs to workers, either in higher premiums, larger out-of-pocket and deductible costs, or suppressed real wages, which have been flat since the mid-1970s. Runaway health costs are one of the main reason why the middle class has shrunk, despite record-low unemployment and a record-high stock market.

The first step in breaking the health-care cartel’s stranglehold on monopolistic pricing is to demand understandable transparency. Without transparency on predatory pricing, no meaningful reforms are possible. And without wholesale reforms to our medical pricing and payment systems, our country is heading over a fiscal cliff.

With the 2020 presidential campaign underway, and voters clamoring for reforms, candidates are proposing ideas that go much further than these recent high-minded speeches — and some of them are going to stick. Our country cannot stand for lip-service from pharma and health-care executives — or our elected officials. We need meaningful healthcare transparency, real negotiations and cost savings for consumers. The medical and financial health of our nation depends on it.

West is founder of West Health, a nonprofit, nonpartisan family of health-care research, policy and philanthropic organizations based in San Diego and focused on lowering health-care costs to improve care for seniors. 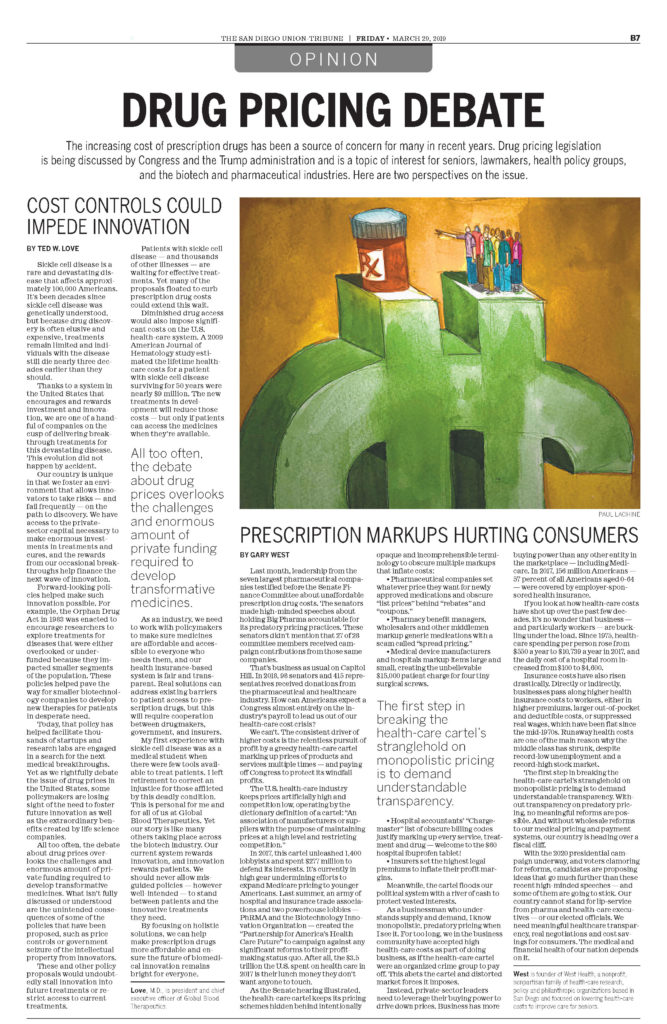 How prescription drug markups are bleeding businesses and workers
Download