What did he just hear? Did that scratchy voice on the car radio really blurt out The 172nd Transportation Company? Deployed … to Vietnam? That was his Army reserve unit, which seemed quietly tucked away in Council Bluffs, Iowa. 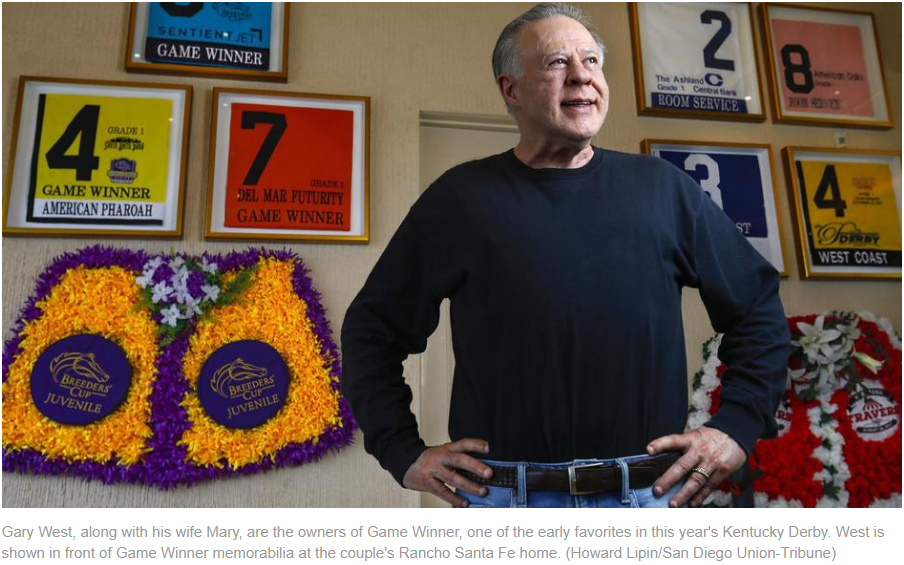 When 20-something Gary West finally arrived to his job at the Armour & Co. meat-packing plant in neighboring Omaha, Neb., in January 1968, his mind a muddled mess, he beelined to the nearest telephone.

“I wanted to get the full story before I got too excited about anything,” said West, 73, a founder with wife, Mary, of a telecommunications empire that made them billionaires and owner of one of the favorites for this year’s Kentucky Derby, Game Winner.

Life was beginning to find roots for West and the whip-smart, beautiful woman he met at a local dance. Things had been gloriously simple to that point, growing up walking rich Midwestern farm soil 50 miles to the northeast.

To squirrel away money as a kid, West worked at the four-lane bowling alley his parents snapped up above the Chevrolet dealership in the small, tight-knit town of Harlan, Iowa — a family or two short of 5,000 residents. He hustled along the hazardous business end of the lanes, dodging flying projectiles.

“When I was about 8 or 9 years old, I used to set pins in the daytime,” said West. “You’d jump down into the pit, load the machine back up, press a big handle down, pick the ball up and roll it back. It was a very dangerous job because pins were flying all over the place.

“At night, I would keep scores for the leagues. I’d get a nickel a person for two hours of work and there were like 10 people, so I’d get like 50 cents. My parents worked 15 hours a day. They couldn’t take a vacation because they were truly owner-operators.

“So I got my work ethic from my parents.”

But now Vietnam — a grisly conflict nearly 9,000 miles away that would claim more than 58,000 American lives — had come calling.

West already had witnessed so much blood, so much death as a young and confused “kill room” supervisor at Armour. Mary, an assistant to the chief executive, helped him land the job that required watching over the horribly unpleasant process that transformed Omaha into the meatpacking epicenter of the United States.

Thoughts tangled in his brain. If the couple rushed plans to marry before he was shipped to Fort Lewis in Washington for advanced military training, he would earn $100 more per month and could sign up for a $25,000 insurance policy.

So much to tackle and consider, before hunkering down in the dark, unforgiving wilds of the Vietnamese jungle.

So much to fear.

“On more than one occasion (during his tour) I told God, ‘If you somehow get me out of this, I will do something nice for the world,” West said recently in his Rancho Santa Fe living room, pausing as tears reddened his eyes. “I didn’t know what it was, but I said, ‘I’ll do it.’ ”