Hospital leaders from throughout the region made an unprecedented pledge Monday to make their emergency departments more senior friendly by 2021. 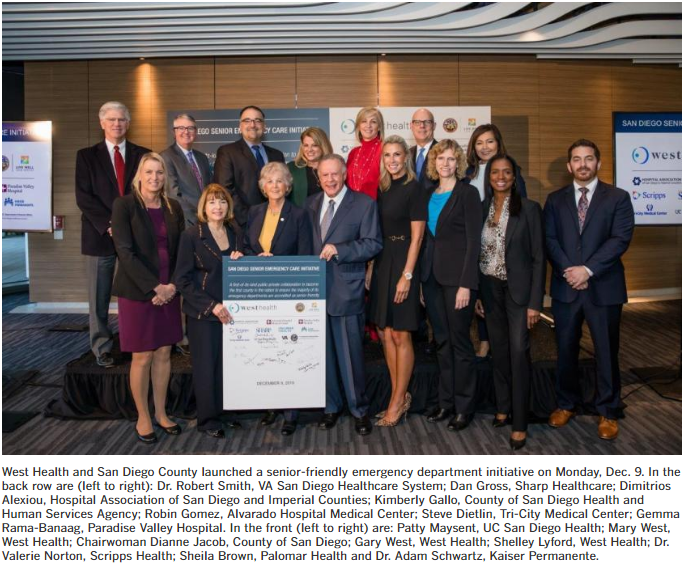 Accreditation provides a framework for training, changes to buildings and equipment, and protocols designed to help often-chaotic emergency centers operate with greater sensitivity to the specific needs of an aging population.

While changes to the physical environment such as gentler light, fewer loud noises, slip-resistant surfaces and recliners instead of hospital beds are the most-visible changes that set geriatric emergency units apart, they’re probably the least important parts of the movement to do a better job with older patients.

The accreditation process asks hospitals to go much deeper, changing the most fundamental aspects of how they operate which affects everything from assessing the severity of incoming health problems to screening for cognitive changes and fall risks. Hospitals must commit to working beyond the walls of their facilities, dedicating additional resources to make sure that patients who are sent home get what they need whether that’s a home visit from a therapist or a follow-up appointment with their primary doctor.

For too long, said Dr. Kevin Beise, an emergency medicine specialist and chair of ACEP’s Geriatric ED Accreditation Program, emergency departments have tended to operate under the assumption that their main concern is that which occurs within their walls.

“We believe that approach is no longer acceptable,” Beise said. “With the geriatric ED model, it’s not just about that fall that happened yesterday; it’s how do we help you not fall in the future?”

The physician, who traveled to San Diego for Monday’s announcement, confirmed that San Diego County’s approach is unique. Nowhere else in the nation, he said, has leadership at all levels come together to pursue the same goal.

“We believe this will be a template for how you bring health care systems together and drive forward geriatric emergency care for the community,” Beise said.

UCSD had more than a little help with executing its plans. West Health, a nonprofit founded by local philanthropists Gary and Mary West, gave the university an $11.8 million grant to help pay for the unit and to study how the care it delivers is different from the standard of care. The investment allowed Jacobs to receive ACEP’s top “level one” certification out the gate. Alvarado has started with a level three designation, which requires less dedicated staffing and less aggressive protocols.

Monday’s event announced an additional $700,000 in support from West Health and the County of San Diego. The Wests and the county, led by East County Supervisor Dianne Jacob, each contributed $240,000, with the balance of the investment in in-kind training and other services from West. Jacob said Monday that it was a suggestion from Robin Gomez, Alvarado’s chief executive, that convinced her to push for the county to support broad-based certification countywide.

The Wests said after the formal announcement that they continue to believe that seniors, the fastest-growing demographic segment of the American population, are getting short shrift in emergency departments nationwide. Funding certification, they said, is intended to level the playing field.