By Shelley Lyford, for West Health

Shelley Lyford is the daughter of Doug Lyford and President and Chief Executive Officer of West Health, founded by philanthropist Gary West. West Health is a family of nonprofit organizations dedicated to lowering the cost of healthcare and enabling seniors to successfully age in place with access to high-quality, affordable health and supportive services.

The two most important men in my life—my father, Doug Lyford, and my longtime boss and mentor, philanthropist Gary West—both answered the call of duty and served in Vietnam more than 50 years ago when they were barely out of their teens. Like many veterans of that unpopular war, they never spoke to anyone about their experiences. Not to their parents or friends back home. Not to their wives of five decades. And not to me, born in 1975, the last year of that war.

I first realized my father had served in Vietnam the day General William Westmoreland came to my tiny hometown of Chelsea, Vermont—population 1,200. It was summer 1980. I was 5. That August morning, I’d tagged along with my father on a trip to Ackerman’s general store.

My father immediately recognized General Westmoreland and introduced himself as a veteran who’d served under him during the Tet Offensive. As they talked, I stared up in awe at these two towering figures who seemed larger than life in every way. In that moment, probably for the first time in my life, I was overcome with pride.

Not everyone felt that way about Vietnam veterans, even in a conservative farming town like Chelsea. As I grew up, I realized that Vietnam had been a divisive war. Farm boys who served in Southeast Asia were not welcomed home as heroes. My father never talked about his wartime experiences, and I learned not to ask him.

I am very close with my father, a beloved high school teacher who mentored generations of teenagers in our school. But his time overseas remained a mystery to me, a blacked-out paragraph in his life story that I could only fill in with my imagination. After college, in the mid-1990s, I visited Vietnam in hopes of better understanding my father’s experience at a similar age. But the warm and friendly welcome I received as a tourist in Vietnam bore no relation to what I knew must have been a trial by fire for him. 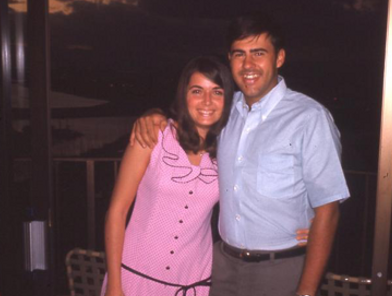 Gary and Mary West more than 50 years ago, right before Gary was deployed to Vietnam.
Credit: Gary West

A decade later, I met another man whose Vietnam experience remained tucked away in the past. Gary West, co-founder of West Health, was a self-made billionaire businessman who had recently begun a second career as a philanthropist. I came to know Gary over the next 12 years while leading his foundation and helping to shape his philanthropic legacy.

When he and I volunteered to serve lunch together at Serving Seniors’ Gary and Mary West Senior Wellness Center in San Diego, a charity that his foundation supports, Gary always gravitated to the veterans whose caps proudly displayed their combat unit insignias. But he never spoke to me about his experience overseas.

Was it simply a coincidence that both Gary and my father chose paths of selfless service to their communities? Or had something about their wartime experiences as young men shaped their adult choices?

As the 50th anniversary of the Tet Offensive approached in January 2018, I sat with them separately, to try to fill in the blanks. What they told me not only illuminated a shadowy corner of their youth, but also shined a bright light on the countless lives—including my own—they have transformed through decades of public service.

As we talked, these 71-year-old men transformed into 21-year-old boys, plucked from their small rural communities and dropped into a tropical jungle half a world away. Neither had sought out the war. But both answered the call of duty, despite misgivings.

My father’s draft notice arrived five days after he graduated from Vermont Technical College with a degree in dairy management. He wasn’t pleased to leave his family farm, but he wasn’t surprised to be drafted. The war peaked in the summer of 1967 when 50,000 young men a month were called up. “I thought I had pretty big britches,” he recalled. “I thought I could take on the world, including Vietnam. All that changed the day my father came to say goodbye to me at Fort Dix after basic training.  It’s pretty hard to walk away from your father knowing that you might not return. I felt pretty small when I got on that plane to Vietnam.” 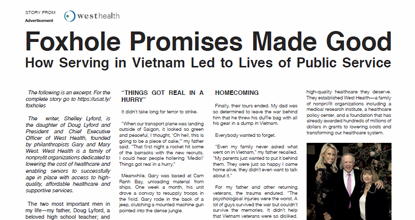