Estimated 98 Million Americans Skipped Treatments, Cut Back On Food, Gas Or Utilities To Pay For Healthcare

WASHINGTON, D.C. — Aug. 4, 2022 — Higher healthcare prices drove 38% of American adults – representing an estimated 98 million people – to either delay or skip treatment, cut back on driving, utilities, and food, or borrow money to pay medical bills in the last six months, according to a new survey conducted by West Health and Gallup. The survey was conducted in June 2022, the same month inflation reached 9.1%, a new 40-year high. 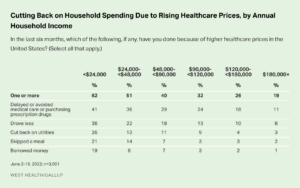 The percentage of people making these kinds of tradeoffs was higher in lower-income households, but higher earners were not immune. While more than half of households earning less than $48,000 a year made spending cuts, nearly 20% of households earning more than $180,000 a year were forced to cut back too. Women under the age of 50 also cut back on medical care and medicine at higher rates than their male counterparts (36% to 27%, respectively) and much higher than men generally (22%).

“People have been making tradeoffs to pay for healthcare for years. Inflation has only made things worse as people are also now struggling with the high price of gas, food, and electricity,” said Timothy A. Lash, President, West Health. “However, unlike those expenses, Congress has the power right now to reduce healthcare prices, particularly for prescription drugs. Legislation is on the table.”

Healthcare inflation, which stood at 4.5% in June 2022, was half the overall inflation rate, which spiked to 9.1% in June, primarily because of rising prices for gas, food, and rent.

Most Americans are not even thinking about how inflation may increase healthcare prices given the spikes in gas and food. When asked, “For which one of the following expenses do you expect costs to rise the most in the next six months?”, 43% of respondents cited gas, followed by food (34%). Healthcare was mentioned by only 3% of respondents. 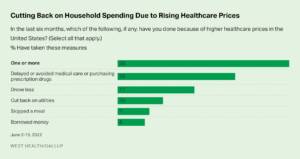 Aside from the tradeoffs that Americans are making to afford healthcare in the current inflationary environment, one in four (26%) say they simply avoided medical care or purchasing prescription drugs altogether because of higher prices and were either unable or unwilling to divert funds from somewhere else to pay for it.

The future does not look bright for these Americans in terms of relief at the pharmacy counter. Overall, 39% report being “extremely concerned” or “concerned” about being unable to pay for care in the next six months, including 33% of Democrats, 44% of Republicans and 42% of independents.

In addition to focusing on the healthcare cost challenges Americans face, the survey looked at how inflation was changing consumer behaviors. Driving less and cutting back on utilities were the top ways Americans tried to cope with higher prices. 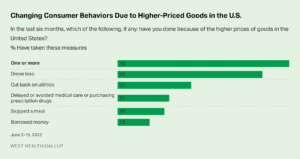 “Inflation is hollowing out consumer spending habits across an array of areas,” said Dan Witters, senior researcher at Gallup. “What is found just under the surface is that after gas and groceries, the role of inflation in reducing the pursuit of needed care is large and significant. And the rising cost of care itself, which is originating from an already elevated level, is having an outsized impact on lessening other forms of spending, compounding the problem.”

Irrespective of race, gender, income or political identity, Americans hold little confidence in their elected representatives to Congress or their own state government to slow rising costs. Three in five adults (59%) are “not at all confident,” and another 35% are “not too confident” that their own members of Congress will take action to lower healthcare costs in the coming months. Only 6% are “somewhat” or “very confident.”

When viewed through a political lens, Republicans and independents report elevated levels of concern about future healthcare affordability, but Americans in all three political identity groups (more than nine in 10) are “not at all confident” or “not too confident” that members of Congress will take action.

If you wish to receive any additional information about the survey, including further demographic group responses, please contact kristjan_archer@gallup.com.

Gallup uses probability-based, random sampling methods to recruit its Panel members. Gallup weighted the obtained samples to correct for nonresponse. Nonresponse adjustments were made by adjusting the sample to match the national demographics of gender, age, race, Hispanic ethnicity, education and region. Demographic weighting targets were based on the most recent Current Population Survey figures for the aged 18 and older U.S. population. Learn more about how the Gallup Panel works.

Gallup delivers analytics and advice to help leaders and organizations solve their most pressing problems. Combining more than 80 years of experience with its global reach, Gallup knows more about the attitudes and behaviors of employees, customers, students and citizens than any other organization in the world.