Oct. 3, 2018 – More than three-quarters of Florida voters feel the cost of prescription drugs is “unreasonable” and about half are not satisfied with how President Trump and members of both parties of Congress are handling the issue, according to a new poll released today by the West Health Institute, a nonpartisan, nonprofit healthcare research organization.

The survey of 750 registered Florida voters found that 81 percent are concerned over the high cost of prescription drugs, with more than a third (34 percent) saying they have not filled or taken drugs as prescribed because of its cost in the last year, which 77 percent find “unreasonable.”

Voters are mostly disapproving of the way the president and Republicans and Democrats in Congress are handling the high cost of prescription drugs. Each has a disapproval rating of around 50 percent on the issue, which is likely to be a key campaign issue in the run up to the midterm elections. The survey found that 71 percent of all Florida voters believe reining in high prescription drug costs should be a top priority for candidates running for Congress. This is a sentiment that most voters believe regardless of party affiliation, the poll found.

“In this polarized political environment, rarely does an issue cut across party lines so strongly. This poll shows all Floridians are fed up with the high cost of drugs and will reward candidates who support common-sense solutions like allowing Medicare to directly negotiate prices with drug companies,” said Shelley Lyford, president and CEO of the West Health Institute. “Voters have told their candidates what they want them to do. Now it’s up to the candidates to make it a priority issue.”

The survey found the cost of healthcare is the single most important issue facing the country for 55 percent of Florida voters—even more important than jobs and the economy (44 percent), immigration (32 percent) and national security concerns (31 percent).

When asked about possible ways to reduce drug costs in particular, 87 percent support allowing Medicare to negotiate directly with drug companies and 74 percent said they would be more likely to vote for a candidate who supports this approach.

Meanwhile, 85 percent said they want President Trump to take steps to clear the way for Medicare to negotiate directly. The president previously supported the idea but did not include it as part of his “Blueprint to Lower Drug Prices” released in May 2018.

Under current law, the federal government is explicitly prohibited from negotiating directly with pharmaceutical companies to lower drug prices for Medicare. According to the Centers for Medicare & Medicaid Services, national health spending was $3.3 trillion in 2016, with $328.6 billion going toward prescription drugs.

“New common sense drug pricing policies are desperately needed before runaway costs cripple our economy and adversely affect millions of Americans,” said Tim Lash, chief strategy officer and executive vice president of the West Health Institute. “Our survey shows a majority of Floridians are ready to make their voices heard on election day as their health and well-being is at stake.”

About the survey
This poll reflects a telephone survey (calls were made on landline and mobile phones in both English and Spanish) of 750 voters statewide in Florida. The poll was conducted by J Wallin Opinion Research for West Health Institute with a margin of error of +/-3.6%. The survey was conducted from August 16 through August 23, 2018. 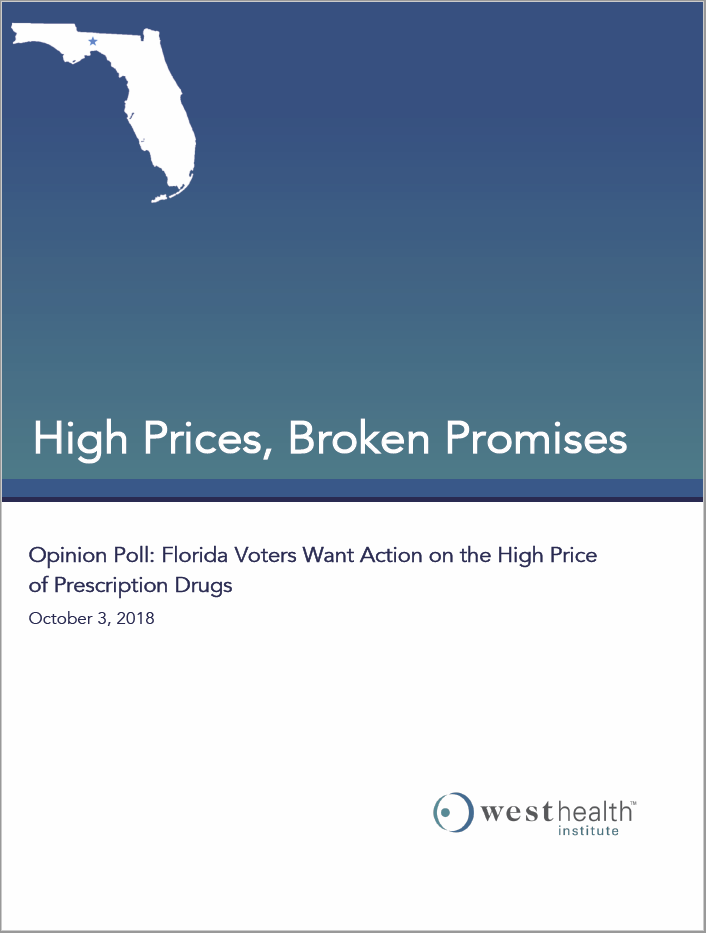