WASHINGTON, D.C. — Oct. 6, 2022 — Nearly half the country (44%), or about 114 million Americans, give poor (30%) or failing (14%) grades to the U.S. healthcare system, percentages that climb higher and grow even more negative when it comes to affordability and health equity, according to a new report from West Health and Gallup, the polling organization.

The 2022 West Health-Gallup Healthcare in America Report asked a nationally representative sample of more than 5,500 Americans to provide a letter grade (A-excellent, B-good, C-satisfactory, D-poor and F-fail) for the healthcare system overall and to give individual grades for affordability, equity, accessibility and quality of care. 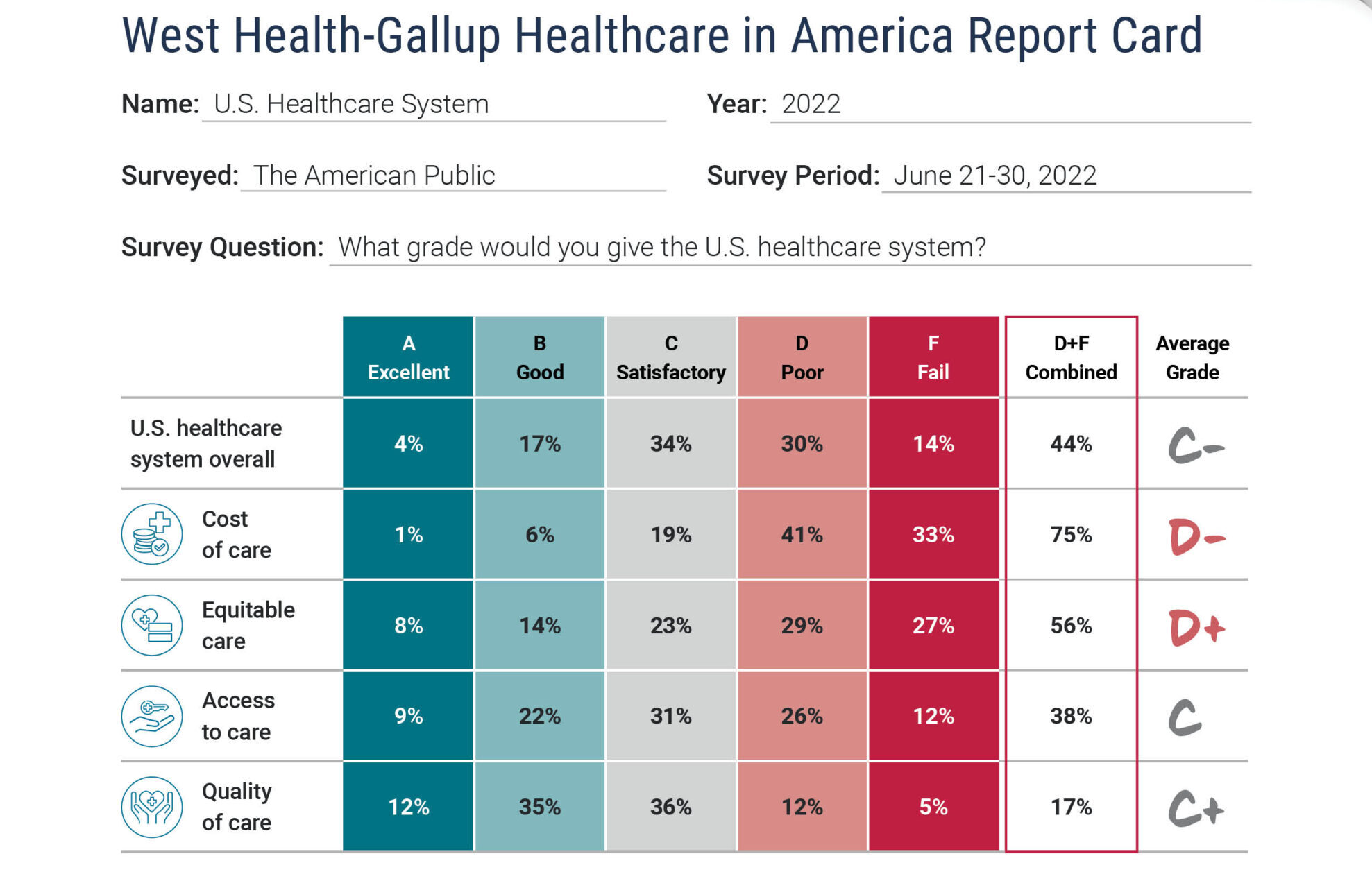 High marks were in short supply across the board, with the healthcare system getting an average grade of C-minus. Women and Hispanic and Asian Americans were more negative, with about half of each group assigning it a grade of D or F compared to about 40% of males, and 43% of White and Black Americans.

Nothing, however, earned more failing grades than affordability, which for three-quarters of Americans — an estimated 190 million adults — deserved no higher than a D (41%) or F (33%), for an average grade of D-minus. A top grade of A was virtually nonexistent (1%), only 6% went as high as a B, and 19% gave it a middling grade of C. The negative feelings about healthcare affordability were strikingly similar across gender, age, race, household income and political persuasion.

“After years of higher prices, growing inequities, skipping treatments, getting sicker, or borrowing money to pay medical bills, it’s no wonder so many Americans view the health system so poorly,” said Timothy A. Lash, President, West Health. “This new report should send a strong message to policymakers that despite the healthcare provisions in the Inflation Reduction Act, most of which will not take effect for some time, there is still immediate work to be done to lower healthcare prices.”

Report Card on Healthcare Equity, Access and Quality of Care

Quality of care was the only aspect of the healthcare system that received more positive than negative marks, though it was still only able to earn an overall grade of C-plus. Less than half (47%) gave it an A or B grade, but a significant gender divide emerged, with women much less likely to give high grades for quality than men (38% vs. 57%). Black and Hispanic Americans were more negative on quality and less likely to give top marks than the general population (36% each vs. 47% overall).

Making the Grade — Why Do So Many Americans View Healthcare So Poorly?

Millions of Americans struggle every day in the face of a high-cost healthcare system, a struggle that not only results in a bad report card but in negative real-life consequences. Nearly one in five Americans say they or a family member had a health problem worsen after being unable to pay for needed care and an estimated 70 million people (27%) report that if they needed quality care today, they would not be able to afford it.

“While America’s grading of the U.S. healthcare system is troubling, it provides a roadmap for healthcare systems and policymakers to invest and fix areas with the greatest impact to shift sentiment,” said Dan Witters, Research Director for the Gallup National Health and Well-Being Index. “What we must remember is that there are actual people behind these grades and that too many Americans are persistently struggling to access and afford quality healthcare.”

Note to Media If you wish to receive any additional information about the survey, including further demographic groups responses, please contact kristjan_archer@gallup.com.

Results are based on surveys conducted June 21-30, 2022, with n=5,584 adults, aged 18 and older, living in all 50 U.S. states and the District of Columbia as a part of the Gallup Panel. For results based on these samples of national adults, the margin of sampling error at the 95% confidence level is +1.6 percentage points for response percentages around 50% and is +1.0 percentage points for response percentages around 10% or 90%, design effect included. For reported subgroups, the margin of error will be larger, typically ranging from ±3 to ±4 percentage points. All demographic group comparisons in the report are significant at p<.05 unless otherwise noted. Learn more about how the Gallup Panel works.