Pharmaceutical Industry Could Experience No Impact to Innovation Under H.R. 3, New Research Finds

WASHINGTON, D.C. and WALTHAM, MA – August 12, 2021 — A new analysis of publicly reported financial information of the pharmaceutical industry finds reducing drug prices could have no impact to future drug approvals.

The research from Bentley University’s Center for Integration of Science and Industry in partnership with the nonprofit, nonpartisan organization West Health Policy Center analyzed the financial practices of more than 1,300 public biopharmaceutical companies and their contributions to new drug development over the past two decades. Researchers modeled a scenario similar to what the industry would experience if Medicare was empowered to negotiate drug prices as proposed under the Elijah E. Cummings Lower Drug Costs Now Act (H.R. 3). The findings, released today by West Health and its Council for Informed Drug Spending Analysis (CIDSA), are described in a white paper titled Will Reducing Drug Prices Slow Innovation?

The analysis builds upon research previously released by the Congressional Budget Office (CBO), and provides lawmakers and the CBO with a new point of reference to consider when further evaluating and scoring the true impact of H.R. 3 and other drug spending policies on the industry. Especially, given that the research currently available on industry profitability and innovation tends to be older in nature and skewed with some pharmaceutical influence.

“Drug makers have hidden behind the unproven notion that skyrocketing drug prices are necessary to sustain innovation,” said Tim Lash, President, West Health Policy Center. “This research debunks that myth – confirming policymakers do not need to make a false choice between lowering costs now and bringing new products to market in the future.”

This research examined the historical relationship between revenue changes and research and development (R&D) spending by public biopharmaceutical companies from 2000-2018. The industry was divided into two categories — large companies defined as having a market capitalization of greater than $7 billion, and small companies with market capitalization under $7 billion. For the 78 large companies, changes in revenue were associated with proportional changes in R&D. However, for the overwhelming majority of companies evaluated there was no association found between changes in revenue and R&D for 1,300 small biopharmaceutical companies. These smaller companies currently sponsor approximately 60% of all clinical trials of new drugs and in the past five years have been responsible for 40% of all new drug approvals.

Using a model that recognizes the contributions of both large and small companies to the pipeline of new drugs, the research showed how any negative impact of reduced R&D spending could be mitigated by strategic allocation of cost reductions in large companies to different phases of clinical development. The model strictly focused on the proportion of revenue invested in R&D and did not assume that industry would make changes to their current corporate practices or policy. 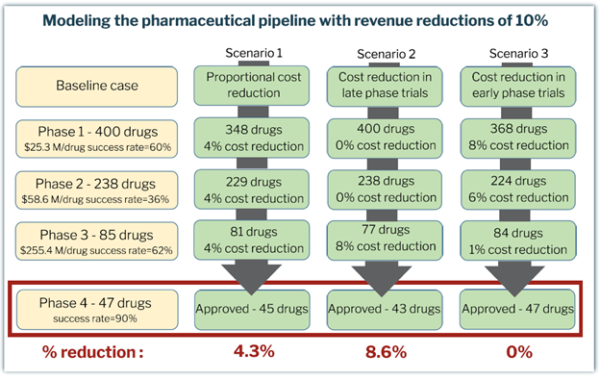 “Our model suggests that the industry’s best practices are sufficiently robust to accommodate the decrease in drug prices anticipated by H.R. 3 without decreasing the number of new drugs coming to market” said Dr. Fred Ledley, director of the Center for Integration of Science and Industry at Bentley University, a former biotechnology entrepreneur and CEO, and senior author on this study. “Importantly, we believe this can be achieved without fundamental changes to the industry’s financial, management or marketing practices or their priorities.”

“Americans are not buying pharma’s claim that drug prices are justified by innovation. In recent public opinion research, we conducted with Gallup, an overwhelming majority of Americans are more concerned with lowering costs than harming innovation,” said Sean Dickson, director of health policy at West Health Policy Center and project lead for the analysis. “These findings affirm the concerns of the American public and make clear that drug manufacturers can sustain reductions in drug spending under recent legislative proposals without impacting innovation.”

Previous research from West Health and John Hopkins Bloomberg School of Public Health found that the pharmaceutical industry could sustain a $1 trillion reduction in revenue, maintain current levels of R&D, and still retain its position as the most profitable industry in the country.

Bentley University is more than just one of the nation’s top business schools. It is a lifelong-learning community that creates successful leaders who make business a force for positive change. With a combination of business and the arts and sciences and a flexible, personalized approach to education, Bentley provides students with critical thinking and practical skills that prepare them to lead successful, rewarding careers. Founded in 1917, the university enrolls 4,200 undergraduate and 1,000 graduate and PhD students and is set on 163 acres in Waltham, Massachusetts, 10 miles west of Boston. For more information, visit bentley.edu. Follow us on Twitter @BentleyU #BentleyUResearch.

The Center for Integration of Science and Industry at Bentley University focuses on advancing the translation of scientific discoveries to create public value. The Center is a nexus for broadly interdisciplinary scholarship designed to integrate biomedical science, data analytics, economics, business, and public policy. Visit www.bentley.edu/sciindustry and follow us on Twitter @sciindustry.

About the Council for Informed Drug Spending Analysis (CIDSA)

CIDSA, the Council for Informed Drug Spending Analysis, is a nonpartisan expert group funded by West Health and focused on bringing a non-pharma perspective to drug spending policy dialogue. Learn more at www.cidsa.org and on Twitter at @CIDSAexperts.