Methods: We conducted a retrospective, observational study of SNF residents who underwent emergency evaluation between January 1, 2017–January 1, 2018. The intervention group was
comprised of residents at six urban SNFs in the Northeastern United States, who received an on-demand telemedicine service provided by an EP. The comparison group consisted of residents of SNFs that did not offer on-demand services and were transferred via ambulance to the ED. Using electronic health record data from both the telemedicine and ambulance transfers, our primary outcome was the odds ratio (OR) of a hospital admission. We also conducted a subanalysis examining the same OR for the three most common chronic disease-related presentations found among the telemedicine study population.

Results: A total of 4,606 patients were evaluated in both the SNF-based intervention and ED-based comparison groups (n=2,311 for SNF based group and 2,295 controls). Patients who received the SNF-based acute care were less likely to be admitted to the hospital compared to patients who were transferred to the ED in our primary and subgroup analyses. Overall, only 27% of the intervention group was transported to the ED for additional care and presumed admission, whereas 71% of the comparison group was admitted (OR for admission = 0.15 [9% confidence interval, 0.13-0.17]).

Read the full paper on eScholarship or download below. 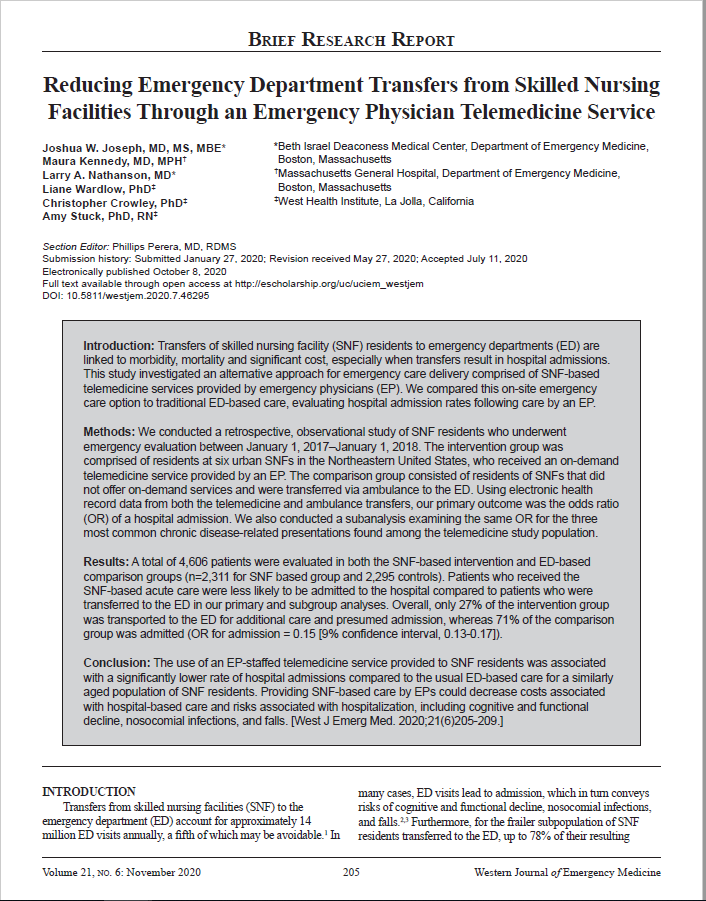