The New York Times: California Governor’s Race Forces Candidates to Face the Past 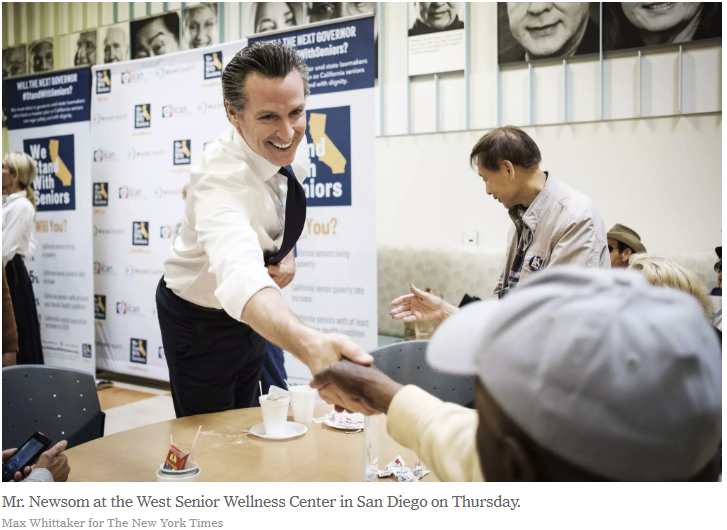 LOS ANGELES — Antonio Villaraigosa, a Democratic candidate for governor of California, was working the hallways of Grand Central Market the other day, stopping people at every turn and food counter to ask for votes in this Tuesday’s primary. That included Bruce Binkow, 61, a boxing promoter, over his lunch at Prawn Coastal.

Mr. Binkow smiled at the pitch from Mr. Villaraigosa, a former mayor of Los Angeles. But as he moved on, Mr. Binkow said his thoughts were less on the race and more on what he described as California’s prosperity under the man who has served 16 years as governor over the past 40 years — Jerry Brown, the Democrat stepping off the stage because of term limits.

“He was an excellent governor,” Mr. Binkow said as Mr. Villaraigosa posed for selfies a few feet away. “California seems to be healthier, more welcoming, more prosperous. I’m very, very happy with him. Those are big shoes to fill.”

A head-spinning field of 27 candidates is competing to fill those shoes. They are facing a stature gap as they are measured, inevitably, against the man they would like to replace. And the leading contenders to win on Tuesday are particularly burdened by political and personal baggage that offer another contrast with Mr. Brown as he prepares to retire to his ranch.

PLEASE READ THE FULL ARTICLE IN THE NEW YORK TIMES