Abstract presented at the Society for Academic Emergency Medicine Annual Meeting; May 15‐18, 2018; Indianapolis, IN.

DESIGN
We assessed the frequency of claims associated with a 30‐day ED revisit among Medicare beneficiaries with and without a dementia diagnosis before or at index ED visit. We used a logistic regression model controlling for dementia, age, sex, race, region, Medicaid status, transfer to a skilled nursing facility after ED, primary care physician use 12 months before index, and comorbidity.

SETTING
A nationally representative sample of claims data for Medicare beneficiaries aged 65 and older who maintained continuous fee‐for‐service enrollment during 2015 and 2016. Only outpatient claims associated with an ED visit between January 2016 and November 2016 were included as a qualifying index encounter.

PARTICIPANTS
We identified 240 249 patients without dementia and 54 622 patients for whom a dementia code was recorded in the year before the index encounter in 2016.

RESULTS
Our results indicate a significant difference in unadjusted 30‐day ED revisit rates among those with an ED dementia diagnoses (22.0%) compared with those without (13.9%). Our adjusted results indicated that dementia is a significant predictor of 30‐day ED revisits (P < .0001). Those with a dementia diagnosis at or before the index ED visit were more likely to have experienced an ED revisit within 30 days (OR = 1.27; 95% confidence interval = 1.24‐1.31).

CONCLUSION
Dementia diagnoses were a significant predictor of 30‐day ED revisits. Further research should assess potential reasons why dementia is associated with markedly higher revisit rates, as well as opportunities to manage and transition dementia patients from the ED back to the community more effectively.

Dementia is a progressive condition that includes a number of possible diagnoses, with Alzheimer’s disease (AD) the most common (estimated 60%‐80% of cases).1 Most AD cases in the United States occur in older adults; 5.3 of the 5.5 million people living with AD in 2017 were 65 years or older, accounting for roughly 10% of all older adults 65 years and older.1 As the nation’s older adult population grows, the number of those living with AD is projected to increase markedly, to an estimated 7.1 million in 2021 and 13.8 million in 2050, assuming no major breakthroughs in curing AD.1

Such a dramatic increase would impact many facets of the healthcare system including the emergency department (ED). Specifically, older adults with dementia visit the ED at a higher rate than older adults without dementia,2, 3 and some studies suggested dementia is independently associated with a higher rate of potentially avoidable ED visits and admissions.4, 5 According to one study that surveyed caregivers, 30% of community‐dwelling dementia patients had experienced at least one ED visit in the past 3 months, most of which were reportedly avoidable including urinary tract infections and injuries related to falls.6 Another study determined that 47% of people with dementia living long term at nursing facilities had one or more ED visits in the past year.7 In this study, comorbidities, age, race, do‐not‐resuscitate status, and prior hospital admissions were all positively associated with earlier time to first ED visit.

In 2013, the US Department of Health and Human Services (HHS) launched the National Plan to Address Alzheimer’s Disease, with reducing potentially avoidable ED visits as a top priority.8 The 2013 report commissioned by HHS leveraged Medicare claims to examine ED use among those living with AD and related disorders, finding more than 950 000 ED visits that “may have been prevented with better primary care in community settings or treatment in a nursing home (for nursing home residents).”9

ED visits among dementia patients are of concern for several reasons. First, the ED can be a disorienting and distressing environment, especially for older adults with dementia.8Second, patients with dementia are also more likely to be admitted compared with older adults without dementia,2 have a lower survival rate following an ED visit,2 and are more likely to experience negative outcomes tied to ED visits and hospital utilization (eg, falls, clinical complications, discharge to skilled nursing facilities [SNFs]).9-11 Third, ED revisits are often costly for patients and their families, the health system, and the federal government. In fact, prior research demonstrated that ED visits and hospitalizations for community‐dwelling dementia patients are also more expensive on average12 because potentially avoidable ED use and hospitalization constitute a sizable proportion (eg, hospitalization accounted for 54% of costs) of higher Medicare expenditures among dementia patients.5

Although prior research has extensively examined ED visit rates among older adults,13-18far less is known about ED revisit rates among older adults with dementia. One of the few studies on the topic2 found dementia patients were more than twice as likely to revisit the ED within 30 days of a prior visit compared with older adults without dementia, before adjusting for several covariates.2 However, this study was done within a specific geographic region in a single health system. ED revisit rates among dementia patients on a national level have not been examined. To address this gap, we evaluated odds ratios (ORs) of 30‐day ED revisits among a nationally representative sample of fee‐for‐service Medicare beneficiaries aged 65 years and older with a dementia diagnosis at or before index ED visit, compared with beneficiaries without a dementia diagnosis. 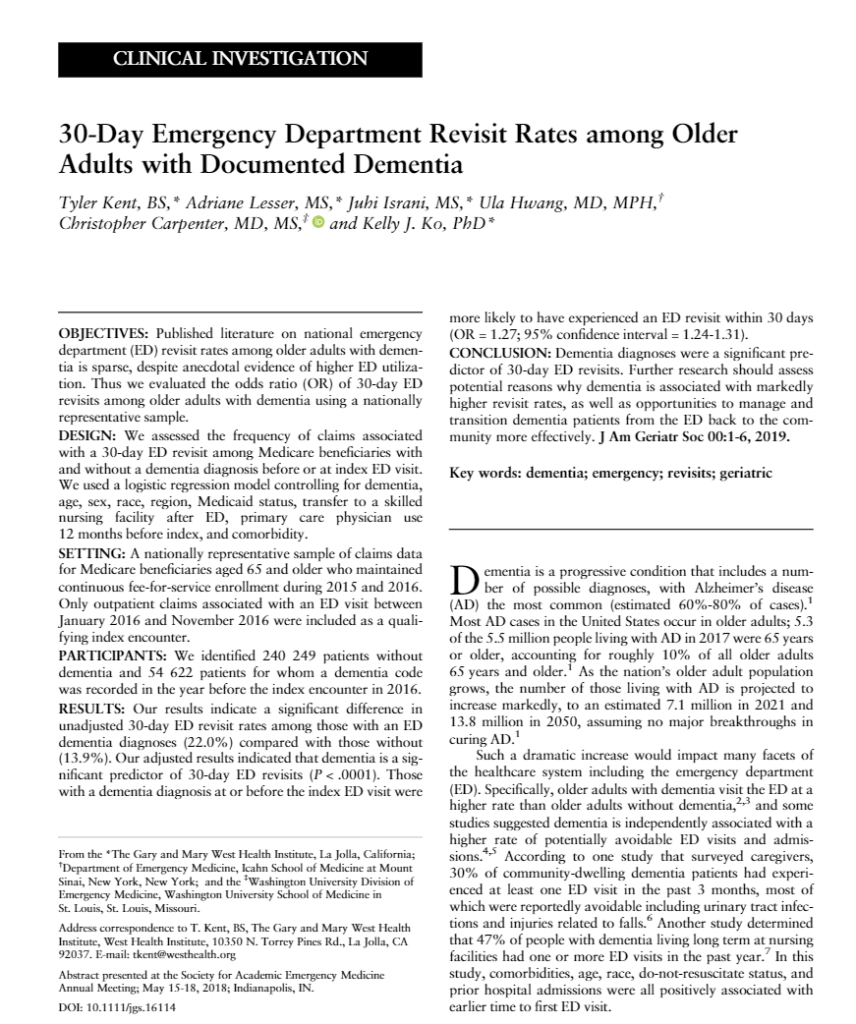